“When you choose S&H, you get US.”
David Fisher, President, S&H Machine

For 62 years, S&H Machine has helped our customers increase profitability by reducing the cost of quality and by providing reliable solutions to their complex machining and sub-assembly needs. 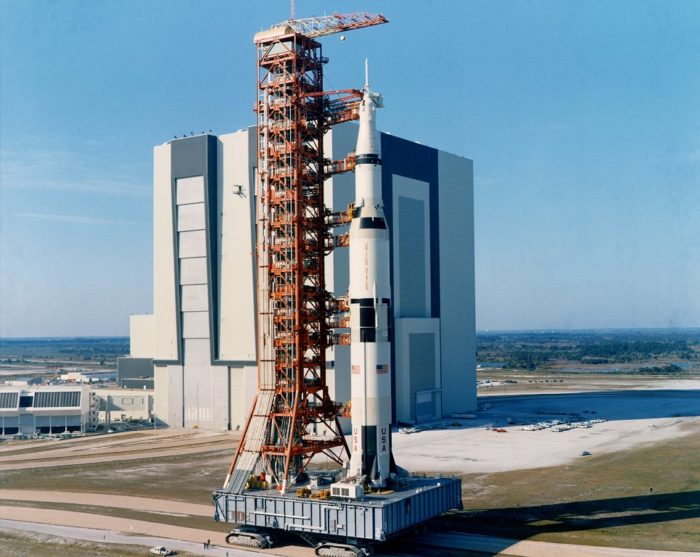 Kenneth Fisher joins the company as a machinist.

The business is incorporated in the State of California. 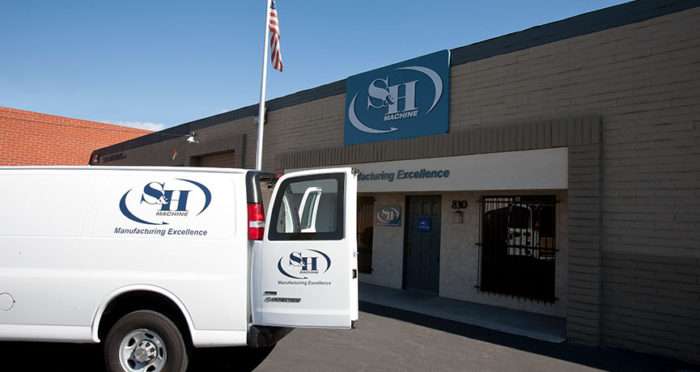 Bert Stowers sells his shares to his two sons, Keith and William Stowers, and to two key employees, Kenneth Fisher and Alfred Graham.

The Corporation purchases the property at 900 North Lake Street.

The company completes the purchase of it’s first Mori-Seiki CNC Lathes, an SL-1 and an SL-3.

David Fisher joins the company and takes responsibility for the positions of Vice President, CFO, and Production Manager.

S&H begins the creation of the database system that will run the company, now known as MAP.

S&H Machine acquires the adjacent building at 830 North Lake Street, doubling the size of its facility to 8,600 square feet.

S&H Machine becomes a Certified Supplier for CRANE Hydro-Aire and is given the authority to ship parts Dock-to-Stock.

S&H commits to a new foundation where solutions are delivered and customer success is our Mission!

S&H is the founding member of the Southern California Manufacturing Group (SCMG), a peer group of companies dedicated to improving their businesses in order to better serve their customers.

Sales top $5 Million for the first time in the company’s history.

S&H passes the initial AS9100 & ISO 9001 Registration Audit from Orion Registrar with no findings.

S&H begins the journey to become Lean; David Fisher tours a World Class Lean facility in the Pacific Northwest and Sees the Light.

S&H becomes a member of SEA, the Supplier Excellence Alliance.

S&H Machine adds an additional 4,350 square feet by expanding into the adjacent building at 826 N. Lake Street. Total square footage is now at 17,200.

Richard Martin joins the company as Quality Manager and AS9100 Management Rep.

S&H achieves the highest Quality and On Time Delivery ratings in its history. As a result, S&H is presented with CRANE Hydro-Aire’s Certified Preferred Supplier Award and is also nominated as Eaton Aerospace’s Supplier of the Year!

S&H is nominated as Eaton Aerospace’s Supplier of the Year!

S&H receives the 2008 Premier Supplier Award from Eaton Corporation. One of only two suppliers out of four thousand candidates to receive this prestigious award, S&H achieves a Quality rating of 99.66% and an On Time Delivery rating of 97.74%.
2010s - Strategic Growth

S&H receives the 2009 Premier Supplier Award from Eaton Corporation. This is the second year in a row that S&H has won this prestigious award, as they continue to set World Class levels of performance in Quality, On Time Delivery, and Value Added Services.

S&H celebrates it’s 50th Anniversary! The event was held at the S&H campus and open to all employees and their families. Also in attendance were numerous repersentatives from the S&H customer base, their supply chain, and their esteemed group of business consultants. A special slide show commemorating the event was displayed, and David Fisher, President, gave an eloquent speech about the ascension of S&H into one of the most respected aerospace manufacturing facilities in Southern California. A special commendation was presented by Ron Kato, Site Leader of CRANE Aerospace Hydro-Aire, to David and Kenneth Fisher. The award was a blueprint of the very first part S&H manufactured for Hydro-Aire mounted onto a plaque, and celebrates the fifty-year relationship between the two companies.

S&H continues to expand, adding an additional 4,800 square feet at 818 North Lake Street. There are now five buildings on the S&H campus, bringing the total square footage to 22,500

S&H receives the 2010 Premier Supplier Award from Eaton Corporation. This is the third year in a row that S&H has won this prestigious award, as they continue to set World Class levels of performance in Quality, On Time Delivery, and Value Added Services.

S&H purchases a dedicated company van for pickups and deliveries.

S&H breaks the record for Annual Sales, eclipsing the mark set in 2008! 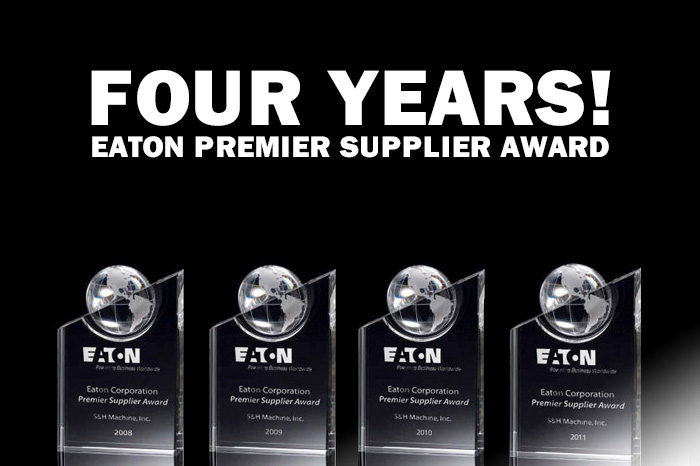 S&H receives the 2011 Premier Supplier Award from Eaton Corporation. This is the fourth consecutive year that S&H has received this prestigious award, and they continue to set World Class levels of performance in Quality, On Time Delivery, and Value Added Services.

S&H acquires Melkes Machine adding this site to the S&H family, increasing the total square footage to 45,500 while adding 32 additional CNC machines and an additional 20 employees.

S&H surpasses key milestone and achieves $1,008,069.00 in sales for the first time in its history in the month of August!

S&H achieves $1,049,068.00 in sales in one month during September and surpasses the one million dollar mark for the second straight month!

S&H achieves $1,001,147.00 in sales for the month of October and surpasses the one million dollar mark for the third straight month!

S&H achieves $1,032,698.00 in sales for the month of November and surpasses the one million dollar mark for the fourth straight month!

S&H closes the year with a new mark for annual sales, $11,571,045.00, which represent a nine percent increase from the previous year.
Strategic Focus

2015 marks a shift away from the traditional “job shop” business model, embarking on a journey to transform S&H into a world class long term contract manufacturer.

Sales performance over the first three quarters are up an average of sixteen percent (+16%) from the previous year.

S&H installs a new Mitutoyo CRYSTA-Apex 5-Axis CNC CMM with a Renishaw REVO probe. The REVO probe allows ultra-high-speed 5-axis scanning for helical, gasket and sweeping sampling of up to 4,000 points per second. This facilitates access to complex workpieces and increases throughout during inspection measurement.

S&H invests in a Doosan NHP 4000 Horizontal Machining Center.  This equipment will support a key customer in the UK, running a family of machined parts that are critical to sensing systems that measure engine temperature, engine speed and engine pressure.

In 2018 Yvonne Ha joins the S&H Management Team as Finance Manager. She holds a Bachelor of Science degree in Finance from California State University, Northridge.

A GREAT COMPANY, A GREAT CAREER

We’re growing and looking for career-focused team members to join us. We believe in hiring people who care about what we do.  The work we do is critical to the safety of others.  Are you up for the challenge?

Cookies
To make this site work properly, we sometimes place small data files called cookies on your device. Most big websites do this too.
Accept